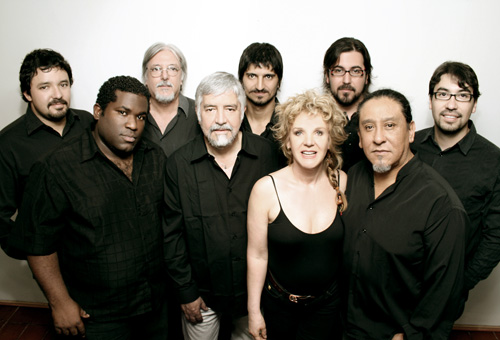 Inti-Illimani (Spanish pronunciation: [ˈintiʎiˈmani]; from Quechuan inti and / Aymara illimani) is an instrumental and vocal Latin American folk music ensemble from Chile. The group was formed in 1967 by a group of university students and it acquired widespread popularity in Chile for their song Venceremos (We shall win!) which became the anthem of the Popular Unity government of Salvador Allende. At the moment of the September 11, 1973 Chilean coup they were on tour in Europe and were unable to return to their country where their music was proscribed by the ruling military junta. In Europe their music took on a multifarious character, incorporating elements of European baroque and other traditional music forms to their rich and colourful Latin American rhythms - creating a distinctive fusion of modern world music. They are perhaps the best internationally known members of the nueva canción movement. Their name means 'Sun of the Illimani' in Aymara. Illimani is the name of a mountain in the Bolivian Andes.

The group was formed by students at Universidad Técnica del Estado at Santiago, Chile in 1967. In 1973 as they were on tour abroad, General Augusto Pinochet came to power. Having heard of the numerous extra-judicial killings of many fellow artists by Chile's army, they took up residence in Italy, resulting in "the longest tour in history" for Inti-Illimani as they lived in de facto exile. They continued their efforts supporting Chilean democracy internationally; samizdat copies of their work continued to be widely distributed in Chile. In September 1988, days after they were no longer banned from Chile, they began touring Chile again. They helped organize the voting down of the referendum that would have re-elected Pinochet. Recently, they were actually supported by Chile as representatives of Chilean culture.

In the past the group was musically led by Horacio Salinas and politically led by Jorge Coulon. However, in 2001 there was a controversial split of the group, which started when three key members left the group (José Seves, Horacio Durán and Horacio Salinas). They were replaced by Manuel Meriño (from Entrama), Cristián González and Juan Flores. Due to the importance of departed members, many called into question the ability of the remainder to carry on the Inti-Illimani name. Meanwhile, the three departed members started their own group they call Inti-Histórico. From 2005 there are two groups:

* Inti-Illimani (Coulon brothers).
* Inti-Histórico (José Seves, Horacio Durán and Horacio Salinas)
Fuente: wikipedia.org
This website uses cookies to ensure you get the best experience on our website. Closing this message or scrolling the page you will allow us to use it. Learn more
OK